Just as the Kaskazi rains started to fall, my classmate’s longing to create peaked. As an artist, she missed having studio space back at Indiana University. Thus, our resident director made good on a promise to introduce her to Stonetown’s art community. Another classmate and I tagged along, and we were the ones who clicked with Philbart Banzie, a.k.a. Bart Michoro, a.k.a. Bart.

My first impression of Bart was that his mind was in eight different places at the same time. He spoke rapidly, and moved unpredictably. His eyes were youthful, but his hands were worn. Not unusual for a Zanzibari, he owned at least two mobile phones. And, he switched between them as seamlessly as his words switched between Swahili and English mid-sentence. Often, it is apparent that he is laughing at your expense, but somehow it is never insulting.

Bart is originally from the islands; though his extended family lives in Iringa, in the center of mainland Tanzania. He attended the Bagamoyo College of Arts, but returned to Zanzibar in order to give back to his community. To him, giving back means spreading a love and appreciation of local art. Although he is a skilled painter, he mostly sells Tinga Tinga style–because as he says–its origins are Tanzanian and that is something to be proud of and share.

After meeting Bart, my classmate, Karlie, and I reconnected with him to set up lessons. Not wanting to rush things in typical reckless Westerner fashion, we waited to discuss the real details in person. First, text messages were exchanged over a week, maybe longer. Then, I stopped by the oceanside alleyway where Bart displays his paintings to tourists; just to check in and be present. Finally, Karlie and I both visited his studio to talk ideas and finances in person.

During that visit, we reached a deal that allowed Bart fair compensation for his time and supplies while he allowed us to become his apprentices. For a couple hours each week, we learned about the history of painting in Tanzania and how to paint Tinga Tinga style. We were clumsy students, and Bart was a (usually) patient teacher. He showed us how to pivot on our smallest finger in order to paint faster without being sloppy. He showed us how to mix kerosene and bicycle paint to make the vivid colors of Tinga Tinga. He laughed at us often, and we were (usually) not insulted.

Bart’s studio comprised a storage room at the back of the Dhow Countries Music Academy. In that hidden space, no roof covered us; the lime-plastered coral rock walls were our only shelter. Despite this, the studio was always stiflingly hot. Indeed, the handful of times I ever wore tank tops on the island were in that sweaty studio. From one floor above, we heard classes dance to hip-hop, taarab, and bachata. At our feet, our palette was a slab of plywood placed atop a cardboard box. Our chairs wobbled and pinched at Karlie’s skirts. Bart’s phones sang disco and Brazilian pop, and the kerosene fumes made us dizzy. It wasn’t uncommon for Bart to leave us unsupervised while he slipped away into other errands or nothing at all. One afternoon, he disappeared for a particularly long time.

Maybe it was the kerosene fumes making us careless; maybe it was the island heat making us lazy, but suddenly my hand slipped. My hand conspired with gravity and the palette of meticulously arranged paints and bottles of oil was their victim. For a moment, time stopped. I gasped, and Karlie flailed. Well intended hands were too late, and half a dozen paints fell to the floor. A wasteful rainbow oozed across the concrete.

With nothing else to do but laugh at our misfortune we gathered up what we could. But, the damage was done. Like guilty children, we moved the box slightly over and pretended that the colorful stain had always been there. We returned to our work, and Bart arrived soon after.

We cautiously watched Bart survey the room. Then, he smiled. No anger flashed across his eyes. No disappointed frown materialized. On the contrary, he smiled. We hastily apologized, Sorry my brother, we beg forgiveness, this is our fault brother.

Bart’s smile broke into his characteristic laughter. Offering us an oily rag to clean Karlie’s arms and whatever we could soak up from the floor, he explained that after weeks of tutoring us he was beginning to feel nervous. He knew from the start that we would make a great mistake some day. Since we still had yet to break anything the buildup was bothering him. Indeed, he wondered if our inevitable mistake might be something truly serious. Thus, the relief he felt now in seeing our spill and our childish attempt to hide it made him laugh with joy. He actually thanked us. Now, he said, we could continue in peace. 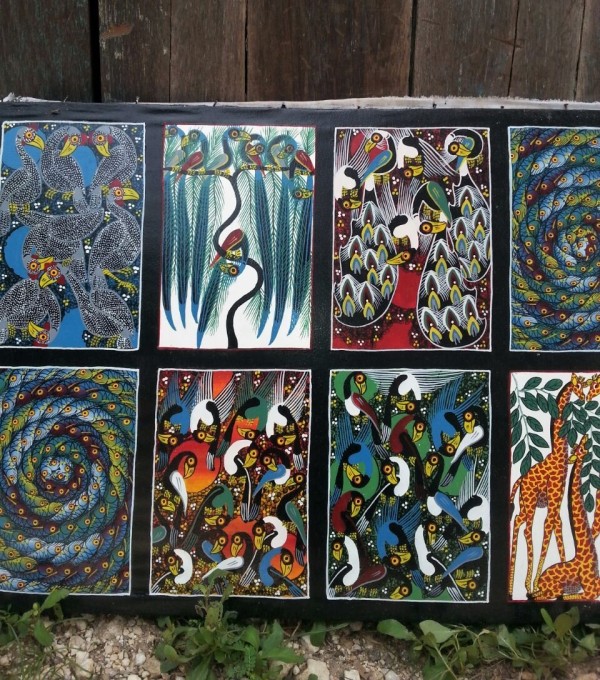