Today marks the 51st anniversary of Ms. Rosa Parks refusing to give up her place on a bus for a white American solely on account of her being a black American. When I think about her story of rejecting an unfair system, I take little solace in the fact that the world has improved since 51 years ago. My uneasy heart is informed especially by a similar experience of discrimination I witnessed just four years ago on a day that was supposed to be only happy. During that experience, I learned from my host sister’s actions that sometimes when the system unfairly rejects you your only choice is to reject that system. Both Rosa Parks and my beloved host sister who I will call by her nickname, Mamu, have since passed. It is difficult for those of us who knew my host sister to talk about her without pain. But, I feel I must tell her story little by little. Here is one little part of my time with Mamu.

In August of 2012, I celebrated Eid al-Fitr (or Idd) with my host family. This is the conclusion to the month of Ramadhan, during which Muslims all over the world focus intently on prayer, charity, and fasting. Fasting is both challenging and exhausting. After 29 or 30 days of it, you can imagine that a celebration might be in order. As such, my Zanzibari family planned a daylong picnic; or as Mamu put it, twendeni tukafanye day-out!

This “day-out” was no small thing. After breakfast of cake and fried chicken, over 20 of us crowded into a private bus. The ladies cooked enough pilau to fill three plastic canisters the size of my torso, and similarly torso-sized tankards of drinking water were crammed between our seats. My seat mate was one of the younger children, who offered me a frayed headphone attached to his tiny radio. He readjusted this radio constantly. Several times, there were false starts when we began down the dirt road before Mamu remembered a missing cousin or a bucket of sambusas. With all food, drinks, and bodies accounted for we finally embarked eastward to the beach.

Our first stop was a hotel in Paje. Paje is one of the towns on Unguja’s southeastern coastline. This portion of coast is dotted with resorts and hotels between its villages. Descendants of Shiraz Persians and Bantu Africans harvest seaweed at low tide, and their own little descendants pull toy cars made out of wire and string along the sand. It is a peaceful place.  Eager to eat and play in the waves, we arrived with excited anticipation. But, Mamu was the first to exit the bus. She closed the door behind her. At first, this confused me. It was unclear to me why we did not follow her. Then, she waved up to the children and signaled them to be quiet. They stifled their excited anticipation accordingly.

As she reached the hotel gate, Mamu confidently announced her presence. Hodi! Hodi! She stood firmly, as she would anywhere. Soon, a member of the hotel staff emerged and she spoke rapidly with him. I smiled, certain that we would join her and flood out together onto the beautiful beach.

Then, minutes passed. Mamu’s gestures became barbed while the hotel employee began to shrink back into his workplace. After a little while longer, he disappeared backward and closed the gate behind him. Our sister returned, but no explanation was proffered. Instead, we simply restarted the bus and drove to another resort.

Once again, our family’s ambassador descended and met with a member of the hotel staff. The process repeated itself. Mamu stood assertively and presented herself peacefully. The employee grimaced and shook his head. He raised apologetic hands, but hands which had nothing to give. Our sister’s gestures grew more aggressive and insistent, but in vain. Again, she returned without spoken explanation.

Personally, I began to feel frustrated. I turned to my younger sister and asked why we could not simply go out onto the beach and claim some space for our picnic. Her concise reply was sobering.

“The white people do not want to see black bodies on their beach. It would upset them.”

I turned away, embarrassed. Through the small opening in the hotel gate, I could see bikini clad ladies sipping cocktails next to their sunburnt, male companions. Those nearly naked bodies permitted to be poolside were white ones. My heart ached for my family and my blood boiled. They were being denied access in their own land on the most special of holy days. We came to have our celebratory day-out and arrived to ‘keep out’–no, let’s be quite honest, not we: they. My white skin was not the obstacle. But, the fact that no one on the bus asked me to intervene certainly bonded me to them even more deeply. We were in this together.

So, we drove on. I sat with shock and rage; my host family sat with smiles and patience. I can never forget this unrelenting patience. On the other hand, I can also never forget a sickening realization that day to know that their patience was rooted in the fact that they were accustomed to this treatment. And, my reaction of surprise and anger was rooted in the fact that I as a white man was not. After a little while, we stopped for a third time. I wondered if we would ever be allowed to have our picnic.

Mamu hopped down onto the sand once more. Adding even more urgency toward the goal of finding some shelter, stringy, grey clouds started to accumulate above. I began to really lose hope until someone with a better view exclaimed Let’s go! Patient smiles turned into joyful laughter. Our sister had done it.

We filed off the bus and established ourselves inside what was a beautiful, halfway built, beachside mansion. My brothers and I embarked on a self-indulgent photo shoot upstairs while our aunties unpacked lunch next to the empty indoor pool.

The stringy clouds produced a little rain, but we swam anyway. The older women and the children played on the shore, and we buried our brother in sand up to his chin while he donned a Pittsburgh Pirates hat I had gifted to him. The girls played nage, a game between dodgeball and monkey-in-the-middle. It was a day full of joy. Personally, I felt surrounded by loving family. Our bumpy journey had bitterly reminded me of the skin-deep–yet significant–differences between us, but our celebration was nonetheless a success. 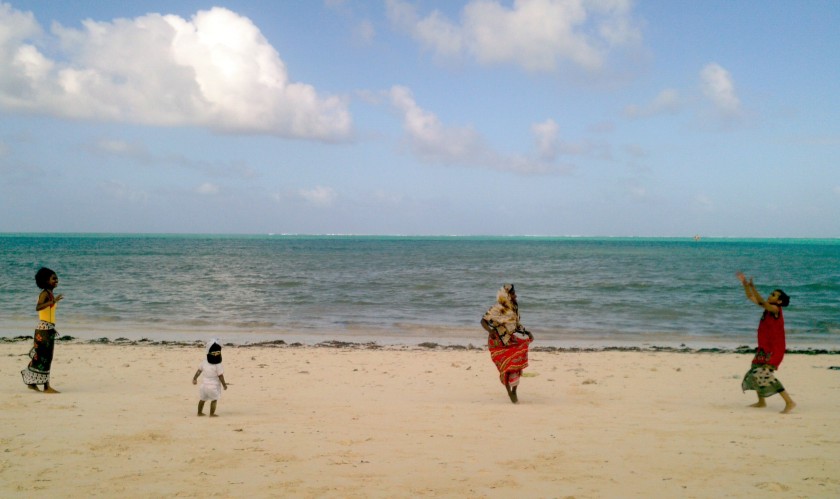 Unfortunately, those reminders had not finished. After helping each other wash away the salt water with a tap by the road, we settled in for lunch. Two dozen hungry hands gratefully scooped up pilau and kachumbari. I was nibbling a banana when a middle-aged woman and her two children approached us from the beach.

“Habari?” She announced in a clearly Italian accent.

A few of my aunties also greeted her in turn. But, it quickly became clear that her Swahili lexicon did not extend past a singsong habari. She ignored my aunties, and my own words drifted off into awkward, silent space. She glanced around from person to person, even though her body faced rigidly toward me only. My host family received her apprehensive eyes but not her attention.

“Pardon me,” she started politely, still facing toward me, “You speak English.”

In this punctuation, I do not include a question mark because I do not recall it being a question. Rather, it felt like a dismissal of the theatrics of Swahili. It was time for her to address the white man in a common, white tongue. This, despite several of the young women in my host family being fully capable of holding a conversation in English. This, despite my being the youngest adult there, surrounded by mothers and grandmothers who displayed evident authority over the function.

“Who are these people?”

“They’re my family. We’re having a picnic.”

Her eyes flashed darkly, and she snorted , “No.”

“No, this is not your family. I am not stupid.”

Awkward silence transformed into deep unease. I felt myself blushing.

She turned dramatically and left. I felt physically ill and put my food down. Then, one of my aunties who is not an English speaker casually asked me, “What did this one want?”

I said something like, “She said we shouldn’t be here. I no–I don’t understand. She said she knows the–um–owner of this house … and that we’ll get into trouble.” I stuttered a little, because my Swahili proficiency wasn’t strong enough at that point to account for a rise in emotion.

Auntie shrugged and we finished our meal. No one rushed. I was relieved to see that everyone else remained calm. In fact, Mamu initiated one more round of nage after the meal, and we celebrated our little sister’s birthday with an orange and white iced cake.

As we packed up to leave, I asked my sister privately how we had come to choose this place after being turned away from the other hotels.

Matter-of-factly as always, she told me that we had bribed the construction workers.

Now, for a long while I felt conflicted about that knowledge. The angry, Italian woman did then seem to have a right to scold us for trespassing. Even then, it did not feel like trespassing in the moment: it felt like innocent, joyous celebration. It felt like finally accessing a space that should have been open to us all along.

No authentic story, much like no person, is pure and without blemish. This story like most of my time with Mamu, is not without mischief. But at this time, with my thoughts also on Rosa Parks and iconoclasts everywhere I cannot help thinking that maybe the only way to achieve in a system which rejects you time after time is to reject that system. I cannot help wondering if we have no choice but to break the rules when the rules themselves are broken. 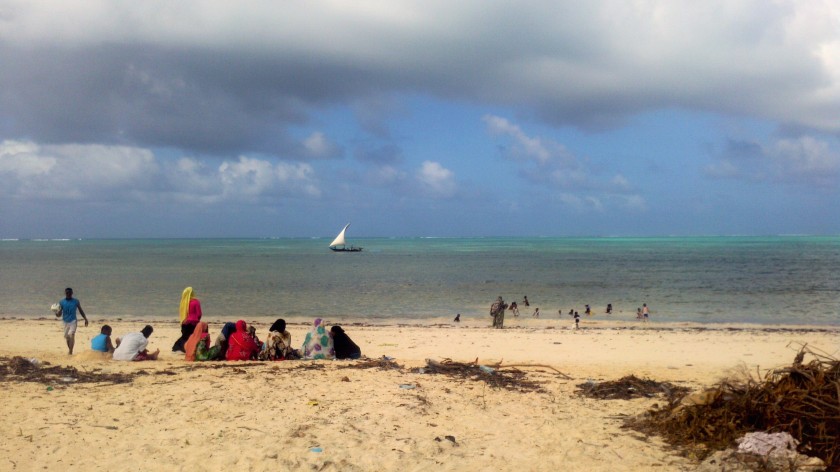